Tap the links for more on selling

Winning sales in the business-to-business arena depends on understanding, navigating and influencing that thing we will call the Decision Making Unit.

A typical Decision Making Unit (DMU) consists of two or more people within an organisation that influence a defined decision that likely has to be made.

From your perspective, that impending decision may be made to the positive, the negative, delayed or dismissed. 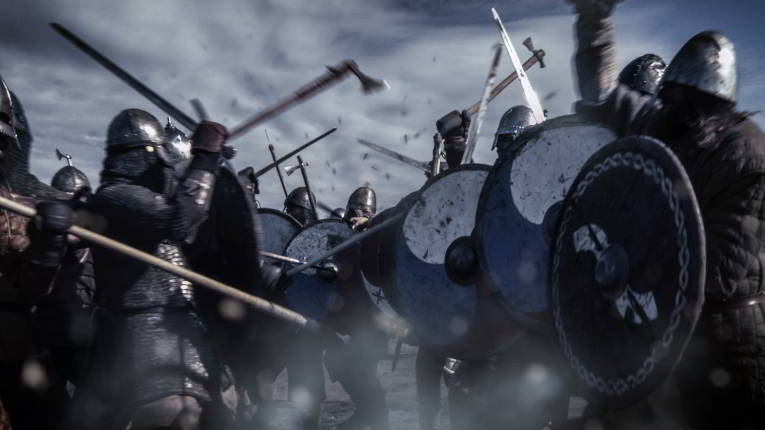 Gaining an insight into those seemingly unnatural scheming forces that manipulate the minds of human beings whenever they come together to make any sort of decision will gift you the advantage of amazing and almost supernatural powers of influence:

– or at least give you an educated guess as to why that big contract slipped like a fish out of your hands and back into that wide and deep ocean of lost potential.

A DMU can either be formal as in a committee discussing and then making a minuted decision; or an informal and unintentional process that may not even consist of arranged meetings but simply contributions during a kettle meeting (comments made while stood around in an office environment waiting for the kettle to boil).

DMUs are therefore common within organisations and understanding their dynamics is crucial in winning sales in the business-to-business environment.

Explaining the perplexing dynamics of the Decision Making Unit

Clarity of thinking and sometimes hard work are required to identify and then influence the DMU.

Everyone in a DMU are human beings with their own minds and agendas: even if their personal agenda is to say yes to everything – it is still an agenda of a type.

Players will often be thinking about and contributing to the buying process with incomplete or bias information. This information may work in your favour or against you.

Often there are additional people beyond those you meet that will influence or even make the final decision on whether they buy from you or from your competitor.

These are the hidden influencers with often unknown agendas.

Let’s call them invisible players – or for dramatic effect when discussing such matters in the sales office, we can perhaps label them as ghosts.

These hidden influencers may be on your side or on the side of your competitor. Some may even want to delay or cancel the purchase.

Some players may be involved at the beginning of the buying process and be there all the way to the moment of order.

When the boss of your prospect company decides to attend a meeting or just part of a meeting and then make a profound comment of wisdom before leaving the room, the consequence can be an upset of the process and devastation of what was increased calibration towards a decision that had been achieved at the previous four meetings and last six months.

Players therefore become active or inactive throughout the buying process.

This drifting in and out of procedures can provide additional complication in that when they re-activate, they are often not up to speed with proceedings or are not aware of all the variables.

These misinformed but relatively powerful influencers can inject misconception and unjustified influence that will interrupt the logic and the expected perfect flow of persuasive information you had diligently worked hard to communicate.

All of these variables contribute to a situation that can be perplexing as to why you suddenly win or lose a contract.

The intensity of the process can be varied depending on the size and organisation of the prospect business, the size of contract and how important the purchase is to the prospect company.

At first purchase of a project, service or product, these scenarios can be amplified and the relative importance of particular items or issues can be exaggerated and even distorted; but once the business has completed a few repeat purchases from you then the process will settle down as trust and familiarity of people, procedures and user experience increases.

Below are a few visual examples of how players within a DMU can work within a company.

These are DMU Touch Maps; a visual interpretation of Contact Sales Mapping.

Study these and write notes on how you might go about winning those big contracts for your business.

Take time to do this. It could be worth millions to your business and your wealth.

Below is a simple scenario where you or your sales representative is in contact with a Primary Contact within a prospect company.

There can often be a Secondary Contact from the start or one that quickly evolves into the situation. 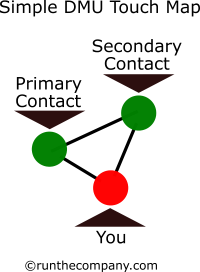 It is common for business development people to concentrate on these one or two contacts within an organisation and assume that the conversion of the sale rests on persuading a single contact or collaboration of two decision makers.

This might be true when targeting very small businesses such as Sole Traders but things get a little more complicated when your prospect organisation is larger than this.

Below is the more common DMU situation for SMEs (Small to Medium Sized businesses). 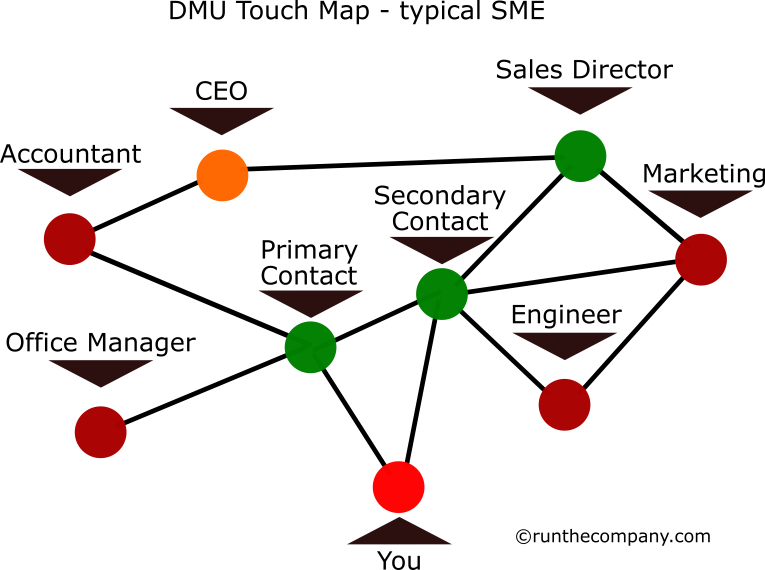 Green identifies people within the organisation that want to buy from you.

Red denotes those against buying from you.

Orange shows those that don’t care either way.

The CEO shown as orange in this case either does not have the time or does not care.

It then gets more interesting when many of the target contacts within your prospect organisation are in fact invisible.

The contacts with rings denotes hidden influencers (the ghosts).

You may not even be aware of their existence.

The contacts without rings are known to you; and if they are to be believed then you have some idea of their intentions towards you.

In the above scenario, the Accountant and Office Manager are influencing your Primary Contact against you – and you are not aware of this because they are hidden influencers.

You may therefore be surprised by a sudden change in mind of your Primary Contact following what you thought was a previously good and positive meeting.

This is because since your last meeting, your Primary Contact has been got at by the Accountant and Office Manager.

Meanwhile, the Secondary Contact is being negatively influenced by an Engineer and a Marketing guy but you or your proposition is being spoken about positively by the Sales Director.

All this is going on behind the scenes while you assume it’s just about your two face-to-face contacts.

We can take this a stage further and make an estimate as to the gravity of influence each player has within the organisation on whether you are chosen for the contract.

The percentages illustrate the gravity of influence each player has on the buying decision. 100% indicates maximum power and lower percentages indicate more limited influence in that these players may express an opinion but their actual influence is limited regarding this particular decision. 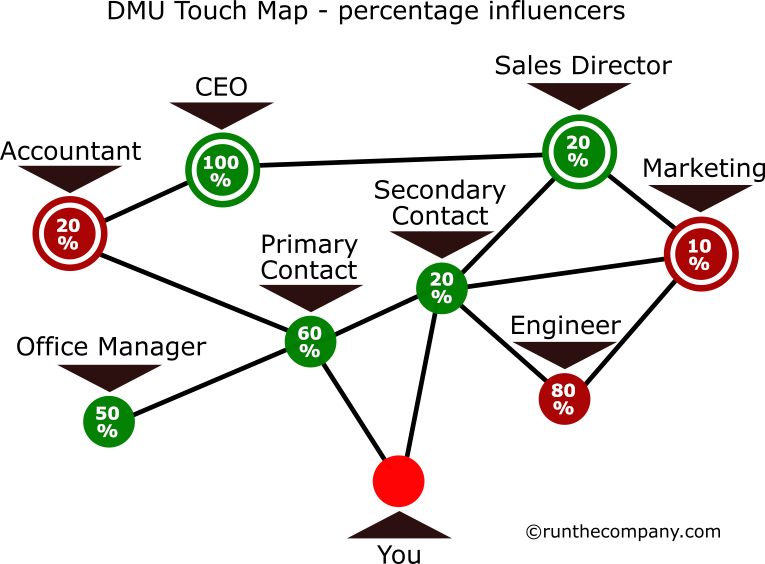 Behind the scenes the CEO is in your favour and has 100% influence on the buying decision. This means the CEO can call it in your favour if he chooses to make that call. The Marketing guy hates you but with only 10% influence, he is even trumped by the Accountant with 20% influence.

The main problem here is the Engineer. He has 80% influence and you know it. You also know that he may lose you the business unless you do something about it. Identify and address his issues or fears of using you – whether they are technical, commercial or personal.

The main purpose of the DMU Touch Map is to get you to realise that there are often things going on in the background that are not immediately obvious to you when attempting to close business with another company.

Creating the map will help you comprehend a situation and enable you to work the circumstance rather than be a victim of it.

The main task in winning business is not just executing empathic and energetic sales techniques but rather the gaining of information. Gaining as much information about the DMU and its players; and knowing who your friends and foes are within this DMU will enhance your chances of success.

Without this, your techniques of persuasion may be nothing more then a gun shooting away at the wrong target – lots of bang, but producing nothing more than headaches and ducking from the other side.

This means that when you or your representative meets with a prospect then the task of the meeting is not just about selling you, your business and your products but it is also about scooping information regarding the structure of the DMU and digging out the players within it.

Evolving DMU information should be on your task list for each subsequent meeting. This may enable you to fill that prospect’s premises with friends and not leave it populated with hidden foes.

At the opening stage of approaching a company you have the advantage of not seemingly knowing the organisation and the players. Traditional wisdom would perceive this as a weakness. But you can play this to an advantage. One way of doing this is Cascading.

Cascading means communicating with the top position or positions within the organisation at first contact and provoking the cascade effect by enabling the target to pass your message to fellow directors or down to middle management – hopefully with a comment of interest or even recommendation.

Remember earlier in this section when we looked at how a single sentence of wisdom from a CEO can derail that carefully executed route to close. Such comments from the boss are full of energy but can also set the tide in your favour.

Your initial approach therefore is not to convince those top targets to buy from you – it is to provoke enough interest or intrigue for the targets to create activity for you within their organisation.

Note that you cannot cascade up the organisation. Once you have made contact with an individual such as a middle manager then you can no-longer approach anyone above him or her without their prior approval.

Trying to climb over an unfavourable decision will be perceived by the initial middle manager contact as an attempted work-around (the sneak) and a deep set enemy will be made of this person.

Hoovering involves targeting, sucking up and then converting loose players within the target organisation.

This has to be done carefully and with the knowledge of your existing contacts. This is easier when the prospect is a large organisation and using relatively generic communication channels such as LinkedIn.

Letting your contacts know that there is a marketing campaign taking place in that industry is usually enough to reassure them that you are not attempting to work around them – even though your actual strategy is more sophisticated and focussed than they might assume.

Drenching means identifying each and every player and potential player within the DMU then communicate to all at the same time.

It’s important that this is done in one hit – after that, things can quickly get complicated. If you don’t drench in one hit then there is a risk of provoking “the sneak” and enemies or at least anti-you players may be spawned.

Most of the elements above can be managed with the use of a good CRM (Customer Relationship Management) system and applying some of the principles of Contact Sales Mapping.

To summarise, there are four types of player in most DMUs.

Look out for the ghosts and be aware of who are the currently active and inactive players in your game towards the deal.

IT in your business

Runthecompany attempts to provide useful information and insight but must not be considered as advice and does not claim to be perfect or even relevant to specific circumstances. Using any of the material provided from this website is done at your own risk and liability cannot be accepted for any direct or indirect consequences.

Always check with a professional before making or delaying a decision.